With the release of Kubernetes version 1.14 Windows containers support was promoted to generally available (GA) and with this milestone the time is right to start looking at creating clusters comprised of both Linux and Windows nodes. Recently the Azure Kubernetes Service launched their preview of Windows node pools which allow us to create mixed OS Kubernetes clusters (I’ll refer to these as hybrid clusters).

Incidentally, its been possible to create hybrid clusters as soon as we had the 1.14 Kubernetes release, however this preview from AKS is the first support for hybrid clusters from a managed Kubernetes provider (although both Google and AWS have announced similar functionality since the AKS release).

I won’t go into details on how to create the hybrid clusters as that is covered in the documentation here. I will warn you however, it’s a little fiddly with the node pool name being limited to 6 characters and the password regex being extremely annoying.

Don’t forget to register the resource provider before you try and create the clusters or node pools.

The Windows node support comes along at the same time as multiple node pool support which is no surprise as the Windows nodes are essentially another type of node pool.

What are node pools?

Node pools are sets of VMs which have the same capabilities, you can use these pools to create clusters which have a number of different VM types to suit all the workloads you might try and run. For example with the Windows nodes we will have a node pool with Windows machines alongside a node pool with Linux machines, the same concept could be used for creating a node pool containing GPUs (for machine learning workloads for example)

If you’re new to some of the more advanced scheduling mechanisms Kubernetes provides, I gave a talk covering this topic at NDC Minnesota 2019 which you can watch here:

I’ve set up a AKS cluster with a single Linux node and a single Windows node.

With the cluster up and running you can create a deployment which is a Windows container and deploy this to AKS using the exactly the same tools/API that you would use for Linux containers. Here you can see the application is running on the Windows node

We can see the image being used is the mcr.microsoft.com/dotnet/framework/samples:aspnetapp image which is a full .NET framework ASP.NET sample image.

And we can browse to this site and see the default sample application. 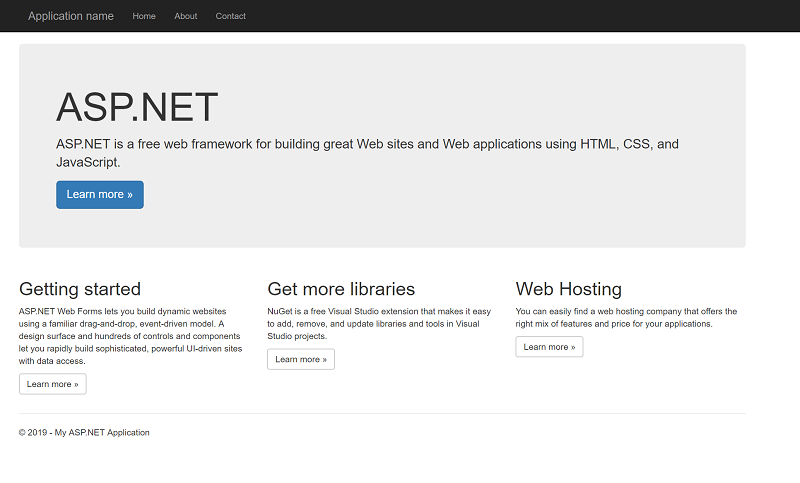 This is the area I’m most excited by, I have been speaking about Kubernetes from the perspective of a .NET developer for approx. 18months and finally the picture I’ve been painting is becoming a reality.

With hybrid Kubernetes clusters we have the ability to deploy and run both “legacy” .NET framework applications alongside newer .NET core applications. Because they’re deployed to Kubernetes we can use a consistent deployment and management approach. Even more exciting is the ability to leverage some of the capabilities of Kubernetes to allow us to begin breaking our monolithic .NET framework applications into smaller .NET Core services whilst being able to control traffic flow between each service. This will all make more sense in the follow up post where I dive into this vision